Nowadays, there are more beneficial and affordable 3D printers in the market than before. This variety makes it hard to find the right 3D printer for your needs.

One of the crucial features of a 3D printer is its heated bed. It opens the gates of printing with the most popular filament materials like ABS, PETG, ASA, and nylon filaments.

So, this article aims to introduce some of the best 3D printers with the heated bed component. 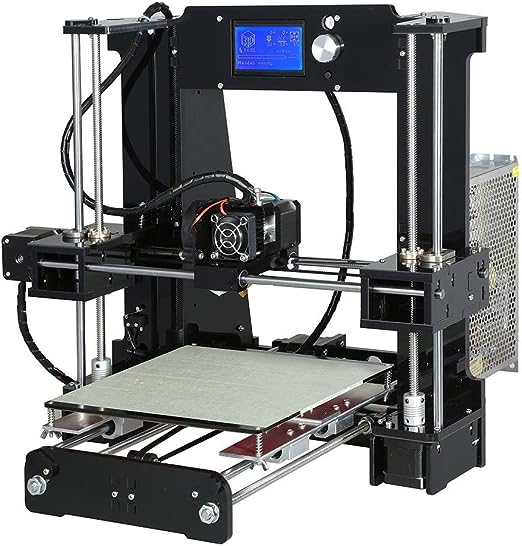 The Anet A8, made by the Chinese manufacturer, Anycubic, is an affordable FDM 3D printer with a design similar to Prusa i3 and probably the cheapest 3D printer that works fine.

The average price of an A8 is around $140. It has some limitations compared to other 3D printers, but it’s the best 3D printer you can get in this price range.

The Anycubic company provides A8 as a full DIY kit, which means you should assemble it before using it. This process may seem daunting, but it helps the user understand the machine better.

The popularity of this printer and its many users generated many support communities, forums, etc. So you can find the answer to many specific questions or issues around the printer and receive a reply immediately.

The design of the A8 is similar to Prusa i3. However, there are two noticeable differences. First, the A8 is housed in an acrylic frame, while Prusa i3 uses an aluminum frame. The second difference is that A8 doesn’t have a power switch. A power switch is not a crucial element. However, an acrylic frame, as a plastic substance, can affect the stability of the machine.

The most significant advantage of Anet A8 over 3D printers within the same price range is its significant build volume. This machine provides a 220×220×240 mm build volume, which is more than enough for many projects or multi-object printing.

Also, there is a heating print bed provided by an aluminum base and an LCD interface with a set of buttons beside the screen. These features make it possible to print using filaments like PLA, ABS, and PETG.

The printer can read commands and print from an SD card or directly from the computer’s USB port. The stock printer can’t connect via Wi-Fi though you can add it with some tweaking.

By the way, don’t panic if you bought the A8 and didn’t find an instruction manual! There is one in the SD card, and many assembly videos are included to guide you through.

In conclusion, Anet A8 is the best 3D printer you can get at its price. It has some limitations and is not quite beginner-friendly.

Ender 3 is the most popular 3D printer of Creality company. The best appealing feature of the Ender 3 is its quality to price ratio. In terms of print quality, Ender 3 can compete with $1000 printers, although achieving this level may need some trial.

The exact price of Ender 3 may moderately vary depending on the provider. However, the average is under $199. You can get it cheaper than its predecessor, Ender 2.

The printer has a minimalistic design. It features a medium-sized build volume of 220×220×250mm, which is enough for many open-source prints from online resources like Thingiverse. There is a BuildTak bed sticker on top of the print bed, making it easier to remove printed pieces off the bed immediately.

The Creality Ender 3 uses a Meanwell 360W power supply for the mainboard and heated bed. The power supply’s high wattage can heat the bed to 100º C in less than two minutes.

Although, giving it more than a couple of minutes will help stabilize the bed temperature and increase surface quality.
It may seem insignificant, but you should note that many printers need more than five minutes to reach 80º C.

Another fantastic feature that makes Ender 3 comparable to professional 3D printers is recovering a print after a sudden shutdown or disconnection. You won’t see such a thing in many $200 3D printers.

The Creality Ender 3 uses an LCD with a knob wheel to control the print parameters. You can use an sd card or USB cable for connectivity.

Speaking of the technical aspects, Ender 3 has a layer resolution of 0.1mm, a maximum print speed of 200mm/s, and a 0.4mm brass nozzle.

Some time ago, Crealty made the printer open source so that everyone has full access to it. As a result, there are lots of upgrades available for the printer. You can change the nozzle into a wear resistance hardened still nozzle or reduce the printer’s noise by changing some fans.

While there are other options out there that provide more advanced features or beginner-friendly designs, it’s hard to find a better 3D printer than Ender 3 in the $200 price tag.

If you want to know more about Creality Ender 3, This video explains it in detail and provides some useful tips.

MP Mini Delta, as the name states, is a desktop 3D printer with a delta system. Unlike Cartesian 3E printers like Ender 3, the Delta Printers are designed to control the nozzle with three arms.

This feature makes Delta printers faster, but on the other hand, limits the build volume. Mini Delta is not an exception. It has a circular 100mm diameter build surface, and the maximum print height is 120mm, but it can print as fast as 150mm/s.

The good news for beginners? This 3D printer is ready out of the box; Once you unpack the device and plug it, it is ready to print. Yay!

Auto bed leveling is another cool feature of this one. You can use it to level the bed in a few seconds. This way, you won’t face common issues caused by an unleveled bed and incorrect first layer heights.

MP Mini Delta has an excellent thick aluminum frame, which helps stabilize the moving components. The extruder benefits from a Bowden tube and a standard 0.4mm nozzle, common among 3D printers.

The average price tag for this 3D printer is around $200, which is logical compared to its value.

The maximum Heated bed temperature is around 60º C, too low for printing ABS and Nylon. However. It is sufficient for PLA and PETG filaments.

Monoprice Mini Delta is a suitable 3D printer for first time 3D printer owners who want to get something that works right out of the box.

Ever since the Creality company conquered the 3D printer markets with its Creality Ender 3 printer, new Ender generations have become the new standard of best budget 3D printers.

One of the Ender product line’s popular products was the Creality Ender 5, which has a bigger build volume and a much more stable box-shaped aluminum frame.

The company first started with Ender 5 series. After a while, they brought the Ender 5 Pro, a modified and revisited version of Ender 5. So there are minor improvements in the design of Ender 5 pro that makes it somewhat more worthwhile.

This 3D printer comes semi-assembled, and you can do the whole process of putting it together in less than an hour. Also, there is a detailed instruction manual and necessary tools for the procedure, and you can always find online helpful assembly videos if you face an issue.

The build volume is 220×220×300mm, which is one of the biggest among desktop 3D printers. This feature, combined with the maximum nozzle temperature of 260o C and a 100-micron resolution, can ensure an excellent 3D printing experience and makes sure that you can easily print the most common filaments like ABS, PLA, PETG, Nylon, etc.

The Ender 5 pro provides a detachable magnetic bed that comes in handy for removing prints from the build surface. Under this surface, there is a fast and powerful heated bed. The 350W Meanwell power supply can rapidly heat the bed to 130o C.

This model doesn’t support automatic bed leveling but has big screws to help the users do it manually. Also, there is always an option to upgrade the 3D printer and make the leveling process more comfortable. For example, with a BLtouch sensor, you can ensure that the print surface is always ready to go.

Ender 5 is slightly cheaper than the pro model. However, the pro version has a more durable extruder and Bowden tube and is very quiet compared to the previous version. The price of Ender 5 on Amazon is $349, while The Ender 5 Pro costs 399$. In my opinion, this 50 buck difference is worth the helpful upgrades.

In this video, you can see how the Creality Ender 5 works in practice.

The original Prusa Mini is one of the cheapest 3D printers of the Prusa company designed to compete with the low cost Chinese 3D printers. Even though the printer carries ‘Mini’ in its name, it has some of the advanced features of the legendary Prusa i3 MK3.

The company is known for its high quality and durable products, and Prusa Mini is not an exception. It’s an easy to assemble kit that, once it is ready to print, the result’s quality will be astonishing. The whole assembly process shouldn’t take more than an hour.

The base model costs around $350 though you can buy some accessories like a spool of filament or filament run-out sensor with some extra money.

But you should be aware that this model has a small build volume of 18×18×18, which is only suitable for day to day smaller prints. The primary machine doesn’t include some features like the filament sensor or PEI flexible bed sheets.

The official numbers for the maximum temperatures are 280o C for the nozzle and 100o C for the bed, yet they can get slightly hotter. It’s expected from the printer to work with ABS, ASA, PLA, some nylon filaments, and PETG without a problem.

Prusa Mini comes with a colored LCD screen that is handier than the old-school single color LCDs. It also shows additional information about the remaining time, the ideal shape of the part, etc. In general, this screen control can be a big help for beginners.

Unlike Prusa i3 MK3, the mini version has a Bowden system that intensifies printing flexible filaments. However, Bowden tubes won’t cause problems frequently.

Prusa has done a great job creating a community of its users who are ready to help each other and share their designs, questions, etc. The company also offers customer support 24/7 via live chat plus a sixty-day return policy.

In this video, you can find the Prusa Mini in action.